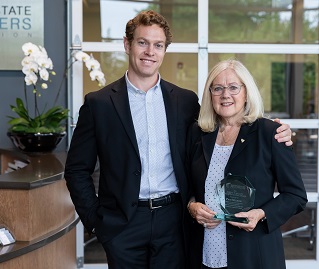 When Pam entered the auto industry after college as a switchboard operator at Nelson Chevrolet, women dealers were not the norm. In fact, in 1979, when she graduated from what was then known as “Dealer Son’s School” – today’s equivalent of the NADA Dealer Academy – Pam was one of just two women in a class of 50 men.

Just six years later, with a 2 ½-year-old toddler and a 6-month-old baby at home, Pam became a dealer in her own right, as well as the first woman to own a Toyota dealership in the company’s northwest sales region.  She has since grown a 5-person dealership to over 90 employees, built a new facility, earned numerous sales and service awards, and is a multi-year winner of Toyota’s President’s Award.

With a firm belief in the importance of giving back, Pam has served as President of both the Skagit Valley College Foundation and Skagit Valley YMCA; and as a board member of the Economic Development Association of Skagit County and Skagit & Whatcom County Junior Achievement.  During her tenure as President of the Puget Sound Automobile Dealers Association, Pam helped secure a $1.5 million grant from the United States Department of Labor to implement the national award-winning General Service Technician Curriculum at Shoreline Community College.

In recognition of all that Pam does for WSADA and her community, the Association made a $1,000 contribution in her honor to the Skagit Community Foundation whose goal is to build and manage permanent endowments for the community, and support non-profits through grants and trainings, including the Skagit Valley Disaster Relief Fund to help sustain local charitable organizations during COVID-19.

“It is an incredible honor to recognize Pam for her industry accomplishments and unwavering commitment to helping others in her community,” said Vicki Giles Fabré, WSADA Executive Vice President. “She is an extraordinary individual, and we consider this contribution to be a particularly meaningful way to celebrate Pam’s receipt of our Association’s most prestigious award.”

When receiving the award, Pam thanked the individuals who helped shape and support her career in the automotive retailing business, including her family, dealership employees, and peers.

Founded in 1920, the Association’s 294 dealer members serve 69 cities and towns across Washington and are responsible for annual sales volume totaling $17.8 billion.  Together, they employ nearly 23,000 people with a combined payroll of more than $1.4 billion.  An average dealership creates 74 local jobs, each paying on average over $61,399 per year plus benefits.  Dealership sales generate hundreds of millions of dollars of tax revenue for state and local government through sales, corporate, and payroll tax revenue.